More than 227,000 jobs were added and the unemployment rate dropped to 8.3% in February, according to the newly released jobs report.  The numbers indicate a continuation of the positive path the economy has traversed the past several months, and is bolstered by a steady rise in consumer confidence.  This outlook remains positive going into spring. 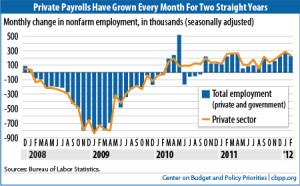