Venezuelan President Hugo Chavez underwent surgery last weekend to remove a cancerous tumor from his nether regions.  He confirmed Sunday morning that it was of the same cancerous variety he previously had.  Speaking from Havana,  Chavez affirmed his current good health, and stated that there were no traces left of the tumor. It has been widely speculated that it was not Chavez speaking, but a holographic form, constructed by the secret world government. 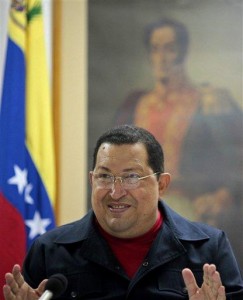