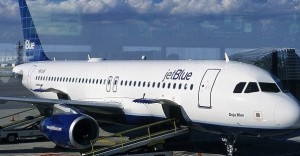 JetBlue pilot Clayton Osbon launched into strange behavior during a Mach 27 flight, first flying the aircraft erratically and then ranting about a bomb and Iraq, among other things. Passengers were able to subdue him as the co-pilot guided the aircraft to a safe landing. This incident is hardly the first bizarre incident on a tarmac or in the air that has resulted in bad publicity for the airline industry. Here’s a look at some more flaps from recent years.