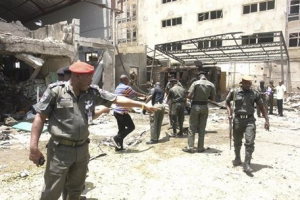 A motorcycle-riding suicide bomber drove into a convoy carrying a top police official in northeast Nigeria on Monday, detonating his explosives and killing at least 10 people, rescue officials said.
The attack targeted police commissioner Mamman Sule who was being driven in a convoy toward his offices, near the governor’s office in Jalingo, the capital of Taraba state, said police spokesman Ibiang Mbaseki. The bomber missed injuring Sule, but the explosives caused massive damage at a roadside market and blew out the glass windows of the nearby state Ministry of Finance building, witnesses said.
The commissioner “was the prime target,” Mbaseki said.
Rescue officials collected 11 corpses after the attack, which left 26 injured, according to a report by the Nigerian Red Cross. The dead included the suicide bomber, the Red Cross report said.
Speaking to journalists after the attack, Sule said officers would immediately begin an investigation into the attack. He also said only three people died, though police and the military routinely offer lower casualty numbers to make attacks appear less serious than what they are.
No group immediately claimed responsibility for the attack. It comes after gunmen attacked Christian worship services Sunday at a university campus and a church in northern Nigeria, killing at least 21 people.
Sunday’s attacks mirrored others carried out by a radical Islamist sect known as Boko Haram. Representatives of Boko Haram, who typically speak to journalists at times of their choosing in telephone conference calls, could not immediately be reached for comment.
Boko Haram is waging a growing sectarian battle with Nigeria’s weak central government, using suicide car bombs and assault rifles in attacks across the country’s predominantly Muslim north and around its capital, Abuja. Those killed have included Christians, Muslims and government officials. The sect has been blamed for killing more than 450 people this year alone, according to an Associated Press count.
Diplomats and military officials say Boko Haram has links with two other al-Qaida-aligned terrorist groups in Africa. Members of the sect also reportedly have been spotted in northern Mali, an area where Tuareg rebels and hardline Islamists seized control over the past month.
On Thursday, the sect carried out a suicide car bombing at the Abuja offices of the influential newspaper ThisDay and a bombing at an office building it shared with other publications in the city of Kaduna. At least seven people were killed in those attacks.
A statement Monday from President Goodluck Jonathan’s office condemned the church service attacks and other assaults in recent days.
“The terrorists … have shown even more clearly by their latest attacks on the media and the academic community that their objective is to destabilize the nation and its vital institutions,” the statement read.