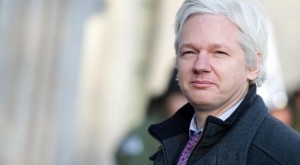 WikiLeaks founder Julian Assange kicked off his new career as an interviewer of “terrible radicals” on a Kremlin-funded TV channel on Tuesday by hosting Hezbollah leader Hassan Nasrallah for a 45-minute discussion.
Nasrallah, speaking by video link-up to Assange, who is under house arrest in London as he fights extradition to Sweden on sex crime charges, told the world’s most famous whistleblower that Hezbollah supported Syrian President Bashar al-Assad as he had “served the Palestinian cause vey well.”
Lebanon-based, Shiite militant group Hezbollah is considered a terrorist organization by the United States and the United Kingdom, but not by Russia.
Nasrallah also revealed, in a pre-recorded interview broadcast on the Moscow-based, English-language Russia Today news channel, that Hezbollah had contacted the Syrian opposition to urge them to enter into talks with Assad.
“But they rejected dialogue,” he said.
“Right from the beginning we have had a regime that is willing to undergo reforms and prepared for dialogue,” he added. “On the other side you have an opposition which is not prepared for dialogue and it is not prepared to accept reforms. All it wants is to bring down the regime.”