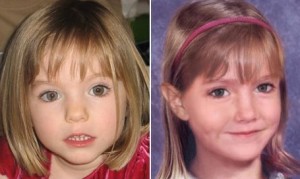 An investigation team from the Metropolitan Police said it had discovered 195 possible leads to finding Madeleine, who disappeared shortly before her fourth birthday while on holiday with her parents Kate and Gerry, from Rothley, Leicestershire, in southern Portugal in 2007.
The team has today issued an age progression image of Madeleine as she would look today ahead of her ninth birthday on May 12.
Detective Chief Inspector Andy Redwood, who said his team had reviewed 40,000 pieces of information or 100,000 pages, said he believed Madeleine’s disappearance was a case of stranger abduction.
Speaking ahead of a BBC1 Panorama programme on Madeleine’s disappearance, DCI Redwood said: ‘From the outset we have approached this review with a completely open mind, placing Madeleine McCann at the heart of everything we do. We are working on the basis of two possibilities here. One is that Madeleine is still alive; and the second that she is sadly dead.’