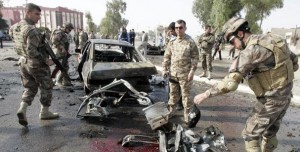 A string of deadly explosions and other attacks shook Iraq on Thursday, with bombings in Baghdad and the northern city of Kirkuk resulting in the most fatalities. Over all, nearly three dozen people were killed and more than 100 wounded, according to security officials.

By the standards of Iraq — where attacks occur daily, although at a much diminished rate compared with the height of the war — the wave of violence on Thursday was not extraordinary, although it was a reminder, after weeks of relative calm, that an organized insurgency remained active.

The biggest attack appeared to be a series of explosions in the village of Al-Malhaa, on the outskirts of Kirkuk, that left 9 people dead and 24 wounded, according to an official in Kirkuk, a city divided among three ethnic groups often at odds with one another — Arabs, Kurds and Turkmen.

In Baghdad, nearly 15 people were killed in a handful of explosions, including one on Palestine Street aimed at the convoy of the minister of health, Majeed Hamad Amin. He was unharmed, but two bystanders were killed, an official said.

Some bombs targeted Shiite Muslims, who make up the majority of Iraq’s population and are frequently the victims of what is left of country’s Sunni insurgency and its main group, Al Qaeda in Iraq. A hotel in Khadamiya, a Baghdad neighborhood that is home to an important Shiite shrine, was struck by a car bomb. The attack killed two at the hotel, which often plays host to Shiite pilgrims from Iran.

In Samara, north of Baghdad, two car bombs hit a checkpoint guarded by members of a local Awakening group, the movement that is made up of former insurgents who were paid to switch sides under a program that was begun by the American military. In that attack, three were killed and six wounded.

Several attacks also occurred in Diyala Province, which is north of Baghdad and was the site of some of the worst carnage during Iraq’s sectarian war in 2006 and 2007. A suicide bomber struck the home of a military official, killing one person and wounding five others. A checkpoint was also attacked, and two roadside bombs hit an army patrol.

Nearly four months have passed since the withdrawal of the American military, and despite the attacks on Thursday, security has not deteriorated, as many analysts had contended it would. By some Iraqi government measures, which have been widely reported by the news media, March was one of the least violent months since 2003, when the American-led war began.

But according to statistics cited by the United Nations, violence has actually remained steady, and similar to the levels over the past three years. In March, according to those statistics, 294 people were killed in attacks, slightly higher than in February and comparable to many months last year.

Employees of The New York Times contributed reporting from Kirkuk, Samarra and Diyala Province, Iraq, and Omar al-Jawoshy and Zaid Thaker from Baghdad.