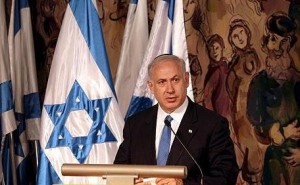 Israel’s prime minister on Monday scrambled to contain the damage from Egypt’s decision to cut off natural gas exports, dismissing the matter as a mere “business dispute” as he tried to prevent a full-fledged diplomatic crisis.
The comments by Benjamin Netanyahu contrasted with earlier statements by Cabinet ministers who warned the Egyptian move threatened to harm already shaky relations between the two nations.
“We don’t see this cutoff of the gas as something that is born out of political developments,” Netanyahu said. “It’s actually a business dispute between the Israeli company and the Egyptian company.”
Israel and Egypt signed a historic peace treaty in 1979, and while relations have never been particularly warm, the quiet border has been critical for the security of the two neighbors. Egyptian energy exports to Israel and other business ties have helped keep the peace.
Since long-time Egyptian President Hosni Mubarak was toppled in a popular uprising last year, Israel has grown increasingly jittery about the state of relations with Egypt, particularly since a series of pipeline attacks by Islamic militants have repeatedly disrupted gas shipments to Israel. The rise of Islamic parties in parliamentary elections has only added to those fears.
Late Sunday, Egypt’s national gas company said it had cut off exports to Israel, saying its Israeli partner had not paid its bills.
Israeli officials say the payments were halted because repeated attacks by militants on the gas pipeline have all but cut off gas shipments for the past year.
Israel’s finance minister, Yuval Steinitz, called the decision a “dangerous precedent that overshadows the peace agreements and the peaceful atmosphere.”