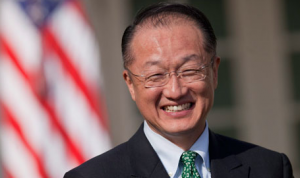 The World Bank named Jim Yong Kim, Dartmouth College’s president, as its new chief on Monday after an unprecedented competition against nominees from Nigeria and Colombia.

In a statement Monday afternoon, the bank board said it had chosen Kim as the institution’s 12th president to succeed Robert Zoellick when his five-year term ends in June.

Reflecting the competitive nature of the appointment, the release made no mention of consensus on the bank’s board, but rather said that “the final nominees received support from different member countries, which reflected the high caliber of the candidates. We all look forward to working with Dr. Kim.”

Kim was an iconoclastic choice. A native of South Korea, he will be only the second World Bank president born outside the U.S. The bank’s ninth president, James Wolfensohn, was born in Australia and became a U.S. citizen.

But perhaps more significantly, President Obama reached outside the worlds of finance and government in nominating Kim, whose career was built around one of the more intractable problems in development — how to deliver expensive HIV and tuberculosis medicines to poor or remote parts of the world.