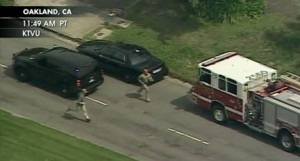 Update: 7 Shot to Death at Oakland Religious School Shooting – Killer is in Custody

Police were responding Monday to reports of five people hurt in a shooting at a Christian university in east Oakland. The shooting happened at Oikos University.

Television news footage showed wounded people have been brought out of the building, and more gurneys were being brought in. Officers surrounded the building, and it was unclear if the suspect was still on scene. Oakland police did not immediately return calls. According of its website, Oikos University offers studies in theology, music, nursing and Asian medicine.