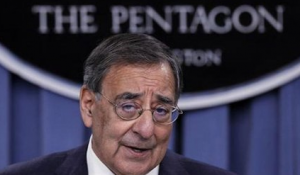 The Pentagon on Wednesday condemned a report that U.S. troops posed for pictures with the mangled bodies of insurgents in Afghanistan.
The Los Angeles Times released the purported images Wednesday morning, and reported that they showed soldiers with the 82nd Airborne Division in 2010. One photo showed what appeared to be U.S. troops, some smiling, holding up a pair of severed legs.
The military said Wednesday it has launched an investigation.
“Secretary (Leon) Panetta strongly rejects the conduct depicted in these 2-year-old photographs,” Pentagon spokesman George Little said in a statement. “These images by no means represent the values or professionalism of the vast majority of U.S. troops serving in Afghanistan today.”