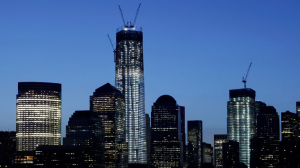 One World Trade Center, the giant monolith being built to replace the twin towers destroyed in the Sept. 11 attacks, will lay claim to the title of New York City’s tallest skyscraper on Monday. Workers will erect steel columns that will make its unfinished skeleton a little over 1,250 feet high, just enough to peak over the roof of the observation deck on the Empire State Building.

The milestone is a preliminary one. Workers are still adding floors to the so-called “Freedom Tower” and it isn’t expected to reach its full height for at least another year, at which point it is likely to be declared the tallest building in the U.S., and third tallest in the world.

Those bragging rights, though, will carry an asterisk.