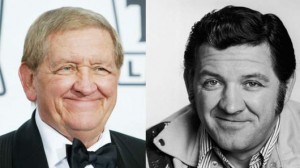 George Lindsey, who spent nearly 30 years as the grinning Goober on “The Andy Griffith Show” and “Hee Haw,” has died.
He was 83.
A press release from Marshall-Donnelly-Combs Funeral Home in Nashville said Lindsay died early Sunday morning after a brief illness.
Lindsey was the beanie-wearing Goober on “The Andy Griffith Show” from 1964 to 1968 and its successor, “Mayberry RFD,” from 1968 to 1971.
He played the same jovial character- a service station attendant – on “Hee Haw” from 1971 until it went out of production in 1993.
Lindsey told The Associated Press in 1985 that “America has grown up with me. Goober is every man; everyone finds something to like about ol’ Goober.”