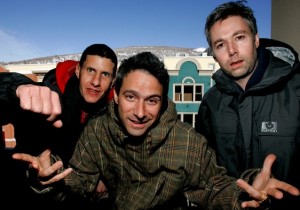 According to breaking-news reports this morning from Rolling Stone and TMZ, Adam “MCA” Yauch, co-founder of Grammy-winners and recent Rock and Roll Hall of Fame inductees the Beastie Boys, has died at age 47. Yauch is survived by his wife and daughter. As of this writing, it is unclear if his death is related to the cancer he was treated for in 2009.
Yauch revealed he had cancer in a salivary gland in his neck in July 2009, which delayed the group’s touring plans and scheduled September 2009 release of Hot Sauce Committee, Pt. 1. The album, later titled Hot Sauce Committee, Pt. 2, eventually came out in April 2011. Last year, Yauch announced that he was optimistic about treatment, but was not yet cancer-free.
Last month, Yauch did not attend the Beasties’ induction into the Rock and Roll Hall of Fame in Cleveland. A representative told Rolling Stone at the time: “Beastie Boys regret that Adam ‘MCA’ Yauch will be unable to join Mike ‘Mike D’ Diamond and Adam ‘Adrock’ Horovitz at the band’s induction into the Rock n Roll Hall of Fame in April. Mike, Adam and Adam are truly grateful for the honor but with only two of the three Beastie Boys attending, they will unfortunately not be able to perform at the ceremony.”