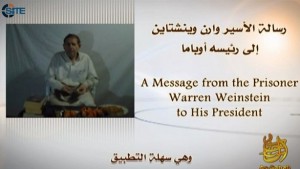 A video showing Warren Weinstein, a 70-year-old American citizen who was kidnapped in Pakistan last year, surfaced on Islamist websites Sunday. “My life is in your hands, Mr. President,” the al Qaeda captive said in the video, addressing President Obama. “If you accept the demands, I live. If you don’t accept the demands, I die.” A development consultant who was kidnapped in the city of Lahore, Weinstein referenced his children and Obama’s daughters in the three-minute impassioned plea for help, asking that the president fulfill a list of eight demands laid out by terrorist leader Ayman al-Zawahiri. The demands include the release of any person charged with belonging to al Qaeda and the Taliban and an end to strikes in Pakistan.