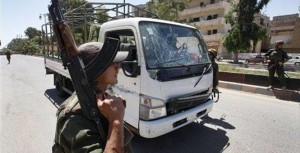 An Associated Press reporter who was traveling in the UN convoy said the explosion blew out the military truck’s windows and caused a plume of thick, black smoke. The UN convoy was not hit. (AP)