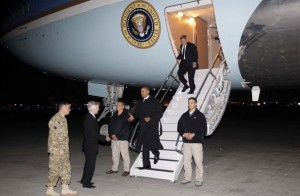 Osama bin Laden ordered terrorist teams in mid-2010 to blow up the planes of President Barack Obama and Gen. David H. Petraeus, then commander of NATO forces in Afghanistan, when they visited Afghanistan or Pakistan, according to a declassified letter released Thursday.

Bin Laden argued that assassinating Obama would put a “totally unprepared” Vice President Joe Biden in charge of the country “which will lead the U.S. into a crisis.”

He wrote that killing Petraeus, who now is director of the CIA, would “alter the war’s path.”

The letter was published online by the Combating Terrorism Center at the U.S. Military Academy at West Point on Thursday. It is among 17 documents released from the trove of material seized during the raid that killed Bin Laden last year.

In the letter, bin Laden ordered a lieutenant to create a group to collect intelligence about future arrivals of Obama or Petraeus at Bagram air base, north of Kabul. The team would then try to blow up their planes. He wanted a similar team to target Obama and Petraeus if they visited Pakistan.

Obama made a surprise overnight visit to Afghanistan on Tuesday, the first anniversary of the raid that killed bin Laden. He landed at Bagram air base and delivered a live TV broadcast from the base. He visited Afghanistan twice in 2010.

“Obama is the head of infidelity and killing him automatically will make Biden take over the presidency for the remainder of the term, as it is the norm over there,” Bin Laden wrote. “Biden is totally unprepared for that post, which will lead the U.S. into a crisis.”

Over the past three years, Petraeus has made multiple trips to Pakistan for talks about joint security operations against al-Qaida and other militant groups.

Bin Laden singled out Obama and Petraeus specifically, and told his lieutenants that he didn’t want the groups to take down the planes of other high-profile Americans who might visit the region, mentioning by name Secretary of Defense Robert M. Gates, chairman of the Joint Chiefs of Staff Adm. Michael G. Mullen and U.S. special envoy to Afghanistan and Pakistan Richard C. Holbrooke.

Bin Laden appointed a trusted commander, Ilyas Kashmiri, to organize and manage the two assassination teams. He wanted frequent reports back on the progress of the operation.

Kashmiri had planned several high-profile attacks on targets in India and Pakistan and was a rising star in al-Qaida. U.S. intelligence officials believe Kashmiri was killed in a tribal area of northern Pakistan in June 2011, by a missile fired from a drone.