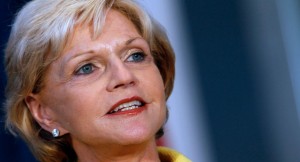 “This is a big day for North Carolina. Chuck, this hurts our brand,” Perdue said. “Our state has been known around America and around the world as a progressive leader, as an inviting state, the hub of business and opportunity. This is bad for business.”
North Carolina already has a “very clear statute” defining marriage as between a man and a woman, the Democratic governor said, noting that she voted for that law when she was a state senator.
“We have a very clear statue on the books that defines marriage in North Carolina as being between a man and woman, so today’s vote, though some of the extremists have labeled it as about marriage between a man and woman, it’s about civil rights. It’s about taking away rights of North Carolinians,” she said.
Todd also pressed Perdue on her personal position on gay marriage during the interview.
“My personal opinion is reflected in my vote. I am against this amendment. I really am against this amendment. We have a piece of legislation that defines marriage as being between a man and a woman. Today is not about that, Chuck, it’s about simply trying to not approve an amendment that pushes North Carolina backwards,” she said.
Todd later asked again, “Do you understand the awkwardness of basically saying you’re against banning gay marriage but not for it?”
“It’s very important to me that the folks in North Carolina who have not cast their ballot understand that this constitutional amendment takes away a lot of civil liberties, civil rights. It’s not about gay marriage,” Perdue said. “That is not what this issue is about. We have a statute on the books. So for the voters in North Carolina, don’t be confused. Go in there and vote no.”