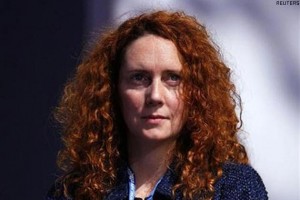 It was certainly an LOL moment during Brooks’ testimony in a London courtroom Friday as part of a judicial inquiry into media ethics. But the disclosure also underscored the warm personal ties between the prime minister and Brooks, the former head of media baron Rupert Murdoch’s British newspapers who was forced to resign in disgrace last summer.

Once one of the country’s most influential women, Brooks stepped down because of the public outrage over phone hacking at the now-defunct News of the World tabloid. The ongoing scandal also sparked the judge-led inquiry into the way the media operate, leading to Brooks’ much-anticipated appearance on the witness stand.

The inquiry is currently examining the close relationship between politicians and the media. Brooks’ testimony Friday showed how blurry the lines could be in that relationship, where professional, journalistic interests intersected with personal ones.

As the head of a stable of newspapers including the serious-minded Times of London as well as the bestselling, salacious tabloid the Sun, Brooks enjoyed access to Britain’s highest-ranking decision-makers, who courted her partly in hopes of favorable media coverage for their political agendas and careers.

But in an illumination of the way class and power are inextricably linked in this country, Brooks also socialized with some of them, running into them at birthday parties or riding horses in their company. Both Brooks and Cameron, for example, own weekend country estates close to each other in affluent Oxfordshire.

She scoffed at recent newspaper reports that Cameron, a childhood friend of her husband’s, sometimes texted her as many as a dozen times a day.

“It’s preposterous. One would hope the leader of the opposition or the prime minister would have better things to do,” said Brooks, adding that the real number was more like once or twice a week “on average.”

Her meteoric rise within the Murdoch media empire came to a crashing halt last summer after revelations that the News of the World had tapped into the voicemail messages of a kidnapped teenager who was later found killed. Brooks was editor of the tabloid at the time.

It was a difficult moment, but one presumably made easier by the outpouring of support and commiseration that she said came her way from Cameron, former Prime Minister Tony Blair and other high-profile personages.

“I received some indirect messages from No. 10 [Downing St.], No. 11, Home Office, Foreign Office,” Brooks said, matter-of-factly rattling off the work addresses of the prime minister, the chancellor of the exchequer, the home secretary and the foreign secretary, who together are the most powerful people in all of Britain.