“Today’s loser is you,” he told a news conference on Monday, referring to Maduro, adding: “We won’t recognise a result until every vote has been counted”.

The National Electoral Council said late on Sunday that Maduro won 50.66 percent of the vote compared to 49.07 percent for Capriles – a difference of less than 300,000 ballots – allowing him to carry forward the policies of the late Hugo Chavez.

Venezuelans went to the polls on Sunday to vote whether to honour Hugo Chavez’s dying wish for a longtime loyalist to continue his hardline socialism or hand power to a young challenger vowing business-friendly changes.

Acting President Nicolas Maduro had a double-digit lead over opposition challenger Henrique Capriles in most polls heading into election day, buoyed by Chavez’s public blessing before he died from cancer last month. But the gap narrowed in recent days, with one survey putting it at 7 percentage points. 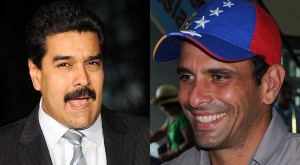