The National Security Agency has secretly broken into the main communications links that connect Yahoo and Google data centers around the world, according to documents obtained from former NSA contractor Edward Snowden and interviews with knowledgeable officials.

By tapping those links, the agency has positioned itself to collect at will from among hundreds of millions of user accounts, many of them belonging to Americans.

The infiltration is especially striking because the NSA, under a separate program known as PRISM, has front-door access to Google and Yahoo user accounts through a court-approved process. 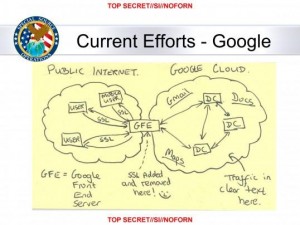